Who is the first Arab to reach the top of the world’s 8th highest peak, located in the Himalayas.

Dolores Al Shelleh has set another historic accomplishment as the first Arab to summit Mount Manaslu, at 8,156 meters above the sea level. 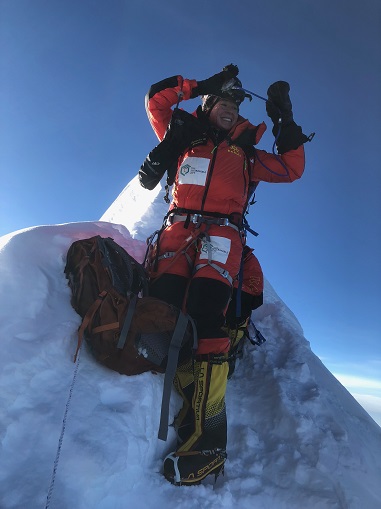 The Sustainable City had appointed Dolores, the first and youngest Jordanian set to climb the Mount Everest, as its Brand Ambassador to raise awareness on sustainable living. With the company’s support, Shelleh ventured on the arduous task of scaling Mt. Manaslu, regarded as the fourth most dangerous for climbers, due to the risk of avalanches.

She scaled the peak in 40 days, braving biting cold and harsh conditions, with the temperature at the summit being a chilly -20-degree C.

She was awarded the ‘Sports Leader of Year’.

Dolores expressed her happiness in scaling Mt. Manaslu, a task she said aimed at enhancing awareness of climate change and its impact on the environment.

She said the climb was a challenge for her, which is part of her ongoing efforts to prepare herself mentally and physically to achieve her goal of summiting Mount Everest as the first and youngest Jordanian.

The 50,000 sqf future-ready building will be home to SEE Institute, the sustainability research, development, and professional training arm of Diamond Developers. The state-of-the-art building is unveiled at WETEX & Dubai Solar Show, the annual trade exhibition organised by Dubai Electricity and Water Authority (DEWA) in Expo 2020. The building will be offsetting all its […] END_OF_DOCUMENT_TOKEN_TO_BE_REPLACED
Diamond Developers October 10, 2021 0
HSBC has issued the first green mortgages in the UAE, heralding a significant moment for the country’s housing market, future homeowners, and sustainable finance. The three loans were approved for HSBC customers purchasing houses in The Sustainable City community in Dubai. HSBC UAE’s green home loans offer an interest rate discount of 0.25 per cent for properties that […] END_OF_DOCUMENT_TOKEN_TO_BE_REPLACED
Diamond Developers July 4, 2021 0